I’m very pleased to announce that Haiku 2020 in now available from Modern Haiku Press for $10 + shipping. The book features 100 notable haiku (by 100 poets) from 2019 that Lee Gurga and I selected together. The introductory essay is by Richard Gilbert, author of The Disjunctive Dragonfly, Poems of Consciousness, and coeditor of numerous books devoted to the life, philosophy and poetry of Kaneko Tohta. The cover photograph is by my wife, Masako, and the two of us designed it together.

Between living and dreaming

there is a third thing.

Poetry as Consciousness: Haiku Forests, Space of Mind, and an Ethics of Freedom by Richard Gilbert (Keibunsha Press, 2018). Order in English.

Also, check out Richard Gilbert’s other conversation with Tim Green from 2015 in Rattle #47

from Poetry as Consciousness: Haiku Forests, Space of Mind, and an Ethics of Freedom by Richard Gilbert (Keibunsha Press, 2018). Order in English.

from Poetry as Consciousness: Haiku Forests, Space of Mind, and an Ethics of Freedom by Richard Gilbert (Keibunsha Press, 2018). Order in English.

Peter Yovu’s haiku collection Sunrise was published originally by Red Moon Press in 2010. Instead of expanding it for a second edition, Yovu decided to go the opposite way by changing the order of poems, and also removing seventeen of them, thus tightening the entire collection up. Other subtle, yet significant, changes: a different cover altogether (again by the author) that enwraps both the front and back covers, blurbs have been removed from the back cover, some of the section artworks have been rotated. The title now has a lowercase s, sunrise. The poems are also presented in a different font with tighter line-spacing, and because seventeen have been removed they are able to breathe even more on their pages. The paper used for the cover is now soft and velvety, not unlike a sleeping animal of some kind, or a sunrise. The changes, though many of them subtle, are collectively powerful. Not unlike haiku poetry: less is more. It all seems more focused and refined, as if time has allowed Yovu to ponder the work more deeply. The results are wonderful, making what I think was an incredible collection into something like a classic among English-language haiku collections. Once again, it’s available from Red Moon Press / Amazon.

that we could flower where the earth is so

For anyone even remotely interested in English-language haiku, Jim Kacian’s latest collection, after/image ($20; Red Moon Press, 2018), is a must. Kacian is the founder of The Haiku Foundation, a past editor of the Haiku Society of America’s journal Frogpond, owner/publisher of Red Moon Press, and editor-in-chief of Haiku in English: The First Hundred Years (Norton, 2013). The author of many haiku collections, this is his first substantial collection in some years, containing a decade of writing.

a trick of the light either way

In parts 2 (“the social project”) and 3 (“after image”) of the collection, Kacian plays on the page with the way the poems appear to readers, juxtaposing poems with themes. Part 2 is presented as four poems per page each with its own theme, repeated: the political, the one, the others, the future.

Part 3 juxtaposes single haiku with a singular theme floating beneath them:

For some, the juxtaposition of poem and theme might startle, or provoke, taking readers into new readings, directions, or insights; for others, it could very well seem unnecessary, even a bit of a distraction.

I’ll give Richard Gilbert the last word: “This is the new world of haiku in English, a demonstration by a master of form, style and technique, who now further incorporates the visual medium to express poetic and philosophical ideas that touch upon consciousness and being. This work represents a new direction for contemporary poetry.

Philip Rowland has been editing his journal, NOON: journal of the short poem, since 2004. He is also a coeditor of Haiku in English: the first hundred years (Norton, 2013). A rich soup of NOON‘s poems has now been allowed to cook, simmer, and marry into NOON: an anthology of short poems (Isobar Press, 2019). Copies are now available via the NOON website.

This is from his introduction: “Editing an anthology inevitably involves difficult choices and reluctant omissions; one could even argue, as did Laura Riding and Robert Graves in their provocative Pamphlet Against Anthologies (1928), that anthologies uproot poems from their contexts, imposing misleading categories upon them. But in the approach taken here, I have tried to make the most of these limitations, through meaningful, often playful, juxtaposition and sequencing of the poems, to produce a newly distinctive body of work that is relatively unconstrained by narrow genre-definitions. The result is a renga-like chain of over two hundred poems by almost half as many poets. This ‘collectiveness’ reflects my assumption that the shorter the poem, the greater the importance of context; and many of the poems in this book are, indeed, really short.“

And though I know this poem has been published in numerous places (first in issue 01 of NOON), I’ll share it once more anyway:

a love letter to the butterfly gods with strategic misspellings

Okinawa by Hasegawa Kai is a stirring meditation full of powerful, haunting imagery on the death and destruction left behind by war and its long-term effects on culture, people, and environment. In some of the poems he zooms out, writing critically, universally, about our home (our planet), and how our species behaves. He does this in poems that reflect not just on the past and the present, and their collisions, but also on the future. The overall effect is that a kind of consecration is being performed. The poems remind me of the following from Makoto Ueda’s Matsuo Basho, a kind of definition for haiku: “mature comments on man and his environment.”

The collection is translated by David Burleigh and available from Red Moon Press. 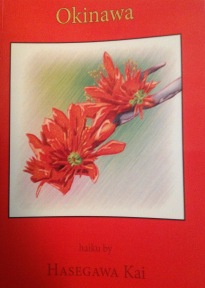 right inside the mouth

of the burning sun

saddened by the earth

of the summer tide

Okinawa has no place 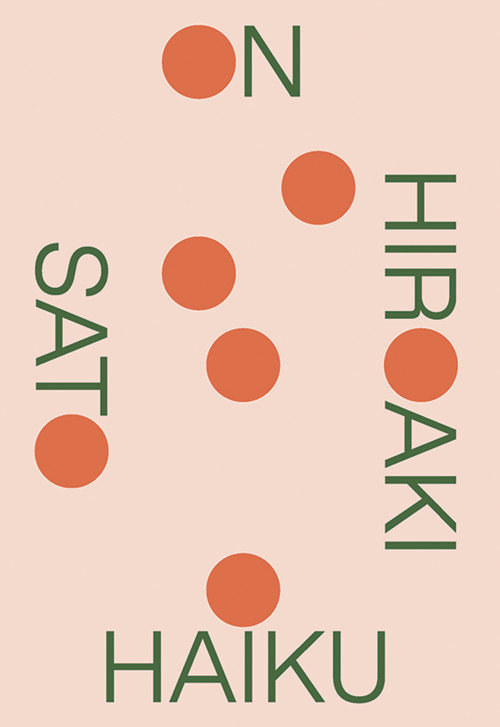 Hiroaki Sato has a new book, On Haiku, coming out from New Directions.

One chapter that takes a look at the haiku of Yukio Mishima is in The Paris Review. It’s available to read online. The essay/chapter was originally published in Roadrunner (R’r).